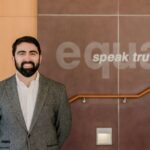 The National Center for Atmospheric Research (NCAR) has named Fernando Tormos-Aponte, assistant professor of public policy and political science, an Early Career Faculty Innovator–one of 12 across the nation. He will receive funding for two years of research, partnering with NCAR scientists to examine energy inequality in the wake of disasters. His focus is on improving disaster resource allocation by incorporating assessments of social vulnerability.

Connecting Faculty Innovators and their students with NCAR researchers is a core element of the program, generating novel scholarship with a clear public impact. “It expands the reach of NCAR science, broadens participation from minority serving institutions, and increases the capacity of NCAR to do actionable and convergent research,” says Everette Joseph, NCAR director.

Tormos-Aponte came to UMBC in 2019 as Postdoctoral Fellow for Faculty Diversity, but his disaster work began two years earlier.

When hurricanes Irma and María hit Puerto Rico in 2017, with sustained winds of 250 km per hour, the island lost power and experienced heavy damage. Power restoration took over 425 days. Vulnerable communities who were already facing economic, health, and social disparities were placed in greater peril. Tormos-Aponte and a team of researchers wanted to investigate if the allocation of power restoration resources favored privileged communities and those who supported the local governing political party, ahead of vulnerable communities.

Tormos-Aponte worked with Gustavo García-López, a researcher at the University of Coimbra in Portugal, and Mary Angelica Painter, a graduate instructor at University of Missouri–St. Louis, to design the Puerto Rico Social Vulnerability Index. “What makes our index different,” he explains, “is that it is designed to capture the variation of vulnerability within majority-minority groups at the frontline of extreme weather events.”

The team published their initial findings in Energy Policy and explained them further in The Washington Post earlier this year. They found that after Irma and María, Puerto Rico restored power faster to those who supported the ruling party and to more privileged communities. Additionally, communities in densely populated areas and that were near essential services received faster assistance.

Tormos-Aponte’s scholarship also explores the challenges of and opportunities for intersectionality as a mobilizing approach in grassroots movements and institutions to end systems of oppression. He co-authored a case study in Latinas and the Politics of Urban Spaces (Routledge, 2021) about the Colectiva Feminista en Construcción, an anti-colonial, Black, feminist collective in Puerto Rico. Co-author Shariana Ferrer-Núñez, scholar-activist and co-founder of the organization, worked with him to document and share their process of developing feminist intersectional awareness and practice.

In PR, Colectiva Feminista en Construcción organizers arrived at an intersectional organizing approach through experiences of exclusion and marginalization within the Puerto Rican Left. 3/6