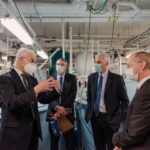 UMBC will grow its aquaculture collaboration with Israeli colleagues thanks to a new statement of intent signed last week at the Institute of Marine and Environmental Technology (IMET), a collaborative research facility in Baltimore’s Inner Harbor that supports faculty affiliated with UMBC; University of Maryland, Baltimore; and University of Maryland Center for Environmental Science. The new agreement builds on decades of collaboration between Israeli researchersand Yonathan Zohar, professor and chair of marine biotechnology at UMBC. It will enable them to grow their ongoing efforts to improve and expand the aquaculture industry around the world.

Coming together to sign the document were Oded Forer, Israeli Minister of Agriculture and Rural Development; Russell Hill, executive director of IMET; and Karl V. Steiner, UMBC’s vice president for research. The minister visited IMET on December 1 with a delegation from the agriculture ministry. Leaders from the United States Department of Agriculture (USDA) Animal Production and Protection program also attended the signing event, which was followed by a tour of the Aquaculture Research Center at IMET.

The partnership will center on addressing challenges to the industry that, once overcome, will make aquaculture more efficient and sustainable, and expand it to more seafood species. Developing zero-waste systems, improving fish health and performance in captivity, and scaling up land-based aquaculture systems are all among the partners’ priorities.

“This is a very important day for IMET and aquaculture,” Hill said at the event. “There is an urgent need to promote agriculture in a sustainable way in the U.S., and we hope to contribute as much as possible to that effort.”

Representatives from IMET, UMBC, and the Israeli Ministry of Agriculture and Rural Development signed a statement of intent to increase collaboration on aquaculture. From left to right: Russell Hill, Yonathan Zohar, Oded Forer, Karl Steiner (front), and Yakov Poleg (rear). Photo by Marlayna Demond ’11 for UMBC.

Focused on the future

Zoharhas been working in the aquaculture space for over 35 years and is an international leader in aquaculture research. In fact, in November 2020, the Binational Agricultural Research Development Fund (BARD), a partnership program between the U.S. and Israel, honored him for the economic impact of his research.

In addition to the BARD recognition, Zohar has received several other awards and accolades in recent months. He was awarded a $10 million grant from the USDA to lead a consortium of aquaculture researchers. He also led the creation of a partnership with Aquacon, a Norwegian company investing $1 billion in aquaculture in the U.S., including a large land-based facility on Maryland’s Eastern Shore. And Zohar’s startup, Silfra Biosystems, LLC, founded in partnership with UMBC microbiologist Kevin Sowers, was recognized as a “Maryland Future 20” company for 2021.

Zohar continues to forge full speed ahead in his work to increase food production in a sustainable way for the increasing human population. “The world’s population is growing by 200,000 each day, placing an increasing demand on our food supply,” Zohar says. “Aquaculture is the fastest growing sector in all of agriculture, and now produces more fish than traditional fishing. Still, we must double production by 2030 to meet the growing demand for sustainable protein sources.”

The land-based systems Zohar pioneered and continues to champion will be a big part of the solution, he believes, especially for salmon. “Atlantic salmon’s U.S. future is land-based,” Zohar says.

Yonathan Zohar shows the Israeli delegation one of the fish tanks at the Aquaculture Research Center. Photo by Marlayna Demond ’11 for UMBC.

University System of Maryland (USM) Chancellor Jay Perman called the environmental research being conducted at IMET one of the “crown jewels” of the system, in remarks during the signing event. “I can’t think of anything in higher ed that’s more current than the environment,” Perman said.

Israeli institutions bring their own strengths to this field. For example, they’ve worked to develop agricultural systems that can succeed in drought conditions, which are common in Israel. In particular, the National Center for Mariculture (food production from the sea) in Eilat, Israel is a world leader.

“Bringing together the complementary expertise of UMBC, IMET, and Israeli institutions is exactly the kind of collaboration that is needed to produce innovations that advance aquaculture and the broader mariculture field,” Steiner says, and the public impact this work will have is directly in line with UMBC’s values.

“As a public research university, our motto is ‘public research for public good,’” Steiner continues. “I can think of no better way to embody this motto than by focusing on one of the most pressing questions of our time—how do we ensure that we can feed the world within rapidly changing ecosystems? We are absolutely delighted that this new agreement will allow us to further strengthen the impact of our faculty’s important work.”

Yonathan Zohar (center) talks about operations at the Aquaculture Research Center with a delegation from Israel, including the Minister of Agriculture and Rural Development, Oded Forer (far right). Photo by Marlayna Demond ’11 for UMBC.