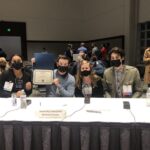 Last weekend, a team of four UMBC students earned second place in a national Jeopardy competition hosted by the American Institute of Chemical Engineers (AIChE). This year, the national competition took place in Boston at the 2021 AIChE Annual Student Conference.

UMBC’s team includes John Laporte ‘22, Sumana Peddibhotla ‘22, Erin Huber ‘22, and Max Bobbin ‘23, all chemical engineering majors. Laporte is the captain of the UMBC AIChE Jeopardy team, and Huber is the president of the UMBC chapter of AIChE.

The UMBC AIChE Jeopardy team with one of their advisors, Neha Raikar.

Huber explains that when she competed for the first time last year, the AIChE Jeopardy contest was completely virtual. “While it was fun participating virtually, getting to compete in-person this year was a lot more exciting,” she says. “There is definitely more of a competitive atmosphere when you are in the same room as all the people you are competing against.”

Huber says that she enjoyed connecting with students on other teams during the competition. “The semi-final was a super intense game, and both teams were competitive. Even after we won, both teams were so in awe of each other’s skills that we ended up hanging out and grabbing dinner together,” she shares. “The camaraderie among the students that attended both the competition and the conference is something that I will always remember.”

Leading up to the national competition, the UMBC team regularly practiced virtually and in-person with fellow chemical, biochemical, and environmental engineering students. Laporte says that the team practices at least once a week, and as the competition approached, the team increased practices to three times each week, meeting twice in person and once online. They earned a spot at the national competition after winning the Mid-Atlantic Regional Competition in spring 2021. Approximately fifty teams competed from across the country this year, organized into nine AIChE student chapter regions.

In the national competition finals, UMBC competed against Iowa State University and the University of Iowa, which won the event. The UMBC ChemE Jeopardy team will continue practicing at least once a week to begin preparing for next year’s competition in January 2022.

The team is advised by Neha Raikar, lecturer of chemical, biochemical, and environmental engineering (CBEE), and Mariajose Castellanos, principal lecturer of CBEE.