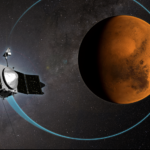 NASA has committed $178 million to extend support for the Center for Research and Exploration in Space Science & Technology II (CRESST II) through 2027. Founded in 2006 and renewed in 2016, CRESST II is a partnership between NASA’s Goddard Space Flight Center and four universities. UMBC and the University of Maryland, College Park (UMD) are the two primary funding recipients, with UMD leading the consortium. CRESST II also supports researchers at Catholic University of America, Howard University, and the Southeastern Universities Research Association.

Talent development is a key component of the partnership, which creates opportunities for undergraduate and graduate students, postdoctoral fellows, and faculty to engage in NASA research on topics ranging from the composition of neutron stars to the atmosphere on Mars. New UMBC funding to support these projects will be more than $63 million over five years under the CRESST II renewal.

Since the last renewal in 2016, the UMBC arm of the partnership, the Center for Space Sciences and Technology (CSST), has focused on offering additional training for budding space scientists. Graduate students with NASA fellowships are co-advised by UMBC faculty and NASA scientists, undergraduates have internship opportunities on site at Goddard, and post-baccalaureate programs offer recent grads a chance to get more experience before applying to jobs or graduate school. Career workshops are available to all.

“We’re trying to do more to support their growth, and also prepare them to move on to other things afterwards,” says Don Engel, director of CSST and assistant professor of computer science and electrical engineering. “We’re building more infrastructure around career support for our scientists, especially those at earlier levels.”

Don Engel, director of the Center for Space Sciences and Technology, UMBC’s arm of the CRESST II partnership, in the Imaging Research Center at UMBC. Photo by Marlayna Demond ’11 for UMBC.

Collaboration at all levels

Engel has also been leading an effort to engage more departments at UMBC in the partnership. Physics is the most involved so far, but researchers in computer science and electrical engineering, mechanical engineering, information systems, and even geography and environmental systems have connected with CSST, meaning the Center spans all three UMBC colleges.

“We have more affiliations with more departments than we’ve ever had before,” Engel says, “and I’m excited about that being just the tip of the iceberg.” Karl Steiner, vice president for research at UMBC, adds, “The scope of work conducted by our UMBC faculty and research scientists under the Center for Space Sciences and Technology makes this one of the largest research centers on the UMBC campus.”

The consortium structure is also an asset. “The partnerships have been phenomenal,” Engel says. “Through having multiple institutions, we’re able to learn from each other’s ideas and strengths. We can tap into the broader resources at each of our institutions for things like trainings.”

A 2018 paper in Nature Astronomy by CSST scientist Kenji Hamaguchi concluded for the first time that the largest star system, within 10,000 lightyears of Earth is emitting cosmic rays, some of which may reach Earth. In this visualization, the supermassive star at the center of that system, Eta Carinae, is at the center of two huge and expanding clouds of dust and other material, the result of an eruption about 150 years ago. Nathan Smith/NASA.

“The CRESST partnership provides an amazing opportunity for government and university researchers to jointly advance NASA research and space science,” adds Laurie Locascio, vice president for research at UMD. “The collaboration has demonstrated the value of our partnership and our capability to do great work together.”

A 2020 paper by CSST scientist Tom Barclay published in Nature reported the discovery of a Neptune-sized planet orbiting a young, nearby star. This visualization shows an interpretation of the planet, AU Mic b (green), and its star, Microscopii. Image courtesy NASA’s Goddard Space Flight Center/Chris Smith (Universities Space Research Association).

Reflecting on the impact this research will have, Engel says, “looking at things on the scale of galaxies or other solar systems lets us know more about our own solar system and the physical laws that govern the universe, including our day-to-day lives.”

“Some of the greatest mysteries that remain in physics can really only be further probed by looking at things that are massively large or very dense—extremes that we can only find by looking far away,” he notes. “And yet, these mysteries always end up unlocking fascinating new technologies that change people’s lives.”

To do this research effectively, he says, bringing together talented students and faculty at all levels, from all backgrounds, is essential. CSST and CRESST II will develop the next generation of space science leaders, who will push the boundaries of human understanding and help answer the universe’s remaining big questions.

Banner image: NASA’s MAVEN spacecraft orbits Mars in this visualization. A 2019 research paper in Science led by CSST’s Mehdi Benna mapped Mars’s global wind patterns, the first time that had been done on any planet (including Earth). Visualization courtesy of NASA.