How the darter got its stripes: New UMBC research expands on sexual selection theory to explain complicated animal patterns 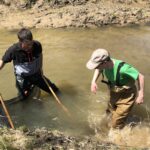 Samuel Hulse, Ph.D. candidate in biological sciences, has spent a lot of time in waders over the last two years. He has traipsed from stream to stream across the eastern U.S., carefully collecting live specimens of small, colorful freshwater fish known as darters and taking photos of their habitats. Then he’s brought them back to the lab to capture high-quality images of their coloration patterns.

Hulse developed a precise, quantitative analysis of those visual patterns, such as stripes, spots, and various mottled looks. His work shows, for the first time, a strong correlation between the complicated patterns on male fish and the fishes’ highly variable environments. The results were published today in Nature Communications.

These findings represent a major expansion of a theory in sexual selection known as “sensory drive,” which emphasizes how an animal’s environment can influence what sexual signals—like visual patterns—are selected for over time.

“Gaudy Darters” by Kate Feller, Ph.D. ’14, biological sciences. Watercolor and ink. These are realistic renderings of darters in the genus Etheostoma.

So far, sensory drive has successfully explained examples such as coloration in cichlids, a group of freshwater fish in Africa. Hulse was working to expand on this research.

Different species of cichlids live at different depths, and which colors the fish can easily see changes as you go deeper and there is less light. Why does this matter? The idea of sensory drive is that animals perceive visual signals, like colors, as more attractive when they are easier for their brains to process. And which signals are easier to process is dependent on the environment. When male fish are perceived as more attractive, they are more likely to reproduce, and their colors are more likely to be passed to the next generation of fish. So, if the theory of sensory drive is true, eventually, most male fish will have colors that are easy for mates to perceive in their particular environment.

In the cichlid fish, “you see this depth-dependent change in the male colors as you go deeper,” Hulse says. With the new work, “we were able to expand on this theory to explain more complicated traits, such as visual patterns,” like stripes and spots.

Sam Hulse with Natalie Roberts, Ph.D. ’19, biological sciences, collecting darters. During their time together in the Mendelson lab, Hulse says, “It was really great having Natalie as a peer, because I could help her out with more of the computational aspects and she could help me out with some of the more biological questions.” Photo courtesy Tamra Mendelson.

Hulse, who is also taking courses toward an M.S. in mathematics at UMBC, brought his quantitative skills to bear on this research. He used a measure called Fourier analysis to examine his fish images, looking at variations in color contrast.

For example, if you were to look at a photo of a grassy hill under a bright blue sky, the greatest contrast in brightness would be between the large areas above and below the horizon line. That contrast is on a larger scale than the differences in brightness between, say, tiny blades of grass. The differences between each blade are small, but occur frequently across the image.

Fourier analysis can translate the contrast patterns in an image into a representative set of mathematical sine and cosine waves. The low-frequency waves, which only swoop up and down once or twice across the entire image, represent large-scale differences, like above and below the horizon. High-frequency waves swoop up and down many times across an image and represent small-scale differences, like between blades of grass.

Researchers can look at the relationships between those waves—how much high-frequency versus low-frequency contrast there is in the image. Hulse’s work looked at that measure to examine the visual relationship between a habitat and the fish that lived in it. And sure enough, his calculations revealed a strong correlation, providing evidence of sensory drive  in male darters.

One argument against the idea that these patterns are attractive to females is the idea of camouflage. Wouldn’t it make sense for animals to match the visual patterns of their environment to avoid getting eaten, rather than to attract females? Darters are under strong predation pressure, so, Hulse says, it’s a valid point.

“Quantitatively describing visual patterns is a big challenge, and there’s not one easy way to do that, so being able to use tools like Fourier analysis is wonderful,” Hulse says. “That actually lets us quantify some of these things that have historically been very hard to describe other than with wishy-washy terminology.”

Tamra Mendelson, professor of biological sciences, is Hulse’s advisor and a co-author on the new paper. She had just begun formulating the ideas for this research with visual ecologist Julien Renoult, a colleague at Centre National de la Recherche Scientifique (CNRS) in Montpellier, France and a co-author, when Hulse joined her laboratory in 2016.

“Julien had inspired me to take concepts from a field called human empirical aesthetics, which is the mathematical and biological basis of human appreciation of art, and apply them to animals’ appreciation of other animals,” Mendelson says. “I was super excited about it, but I didn’t have the mathematical chops to really take it as far as it could go.”

So, when Hulse arrived, “It was a perfect match. Sam is the ideal student to be doing this project.”

And for Hulse, Mendelson was the ideal mentor. “I think she strikes a really good balance of not being too hands on, but always being there when I am confused with something,” he says. “I feel like her mentorship style allowed me to develop on my own, and at the same time, I’ve never felt like there isn’t help there.”

Hulse also spent several months in France working with Renoult to iron out some of the statistical challenges of the work—which were many. “The data analysis became a lot more complicated than we thought, and there were a lot of technical snags,” Hulse says. “So it was really great to be able to be there working directly with Julien, who has a lot of background with these sorts of methods.”

Bringing it all together

Hulse was drawn to this work by the unique blend of skills it requires. “I love the interdisciplinary nature of it. We’re bringing together field biology, sensory biology, a little bit of neurobiology, and image analysis,” he says. “That’s one of the most attractive things about this project for me—how much I get to learn and how much I get to take little pieces from so many different areas.”

Now, Hulse, Mendelson, and Renoult are excited to see where their new work leads. “There’s not a lot of theory in sexual selection that can be used to explain why you see one pattern evolve in one animal where you see a different one evolve in a closely related species,” Hulse says.

The new findings open the door to much more exploration with different species, including animals that live on land. In any group of animals that relies on vision, has visually distinct environments, and where the animals have distinct habitat preferences, Hulse argues, “this theory should hold.”