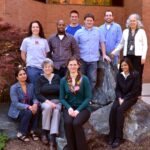 After 41 years at UMBC, Suzanne Ostrand-Rosenberg, professor emerita of biological sciences, retired in August 2018 and moved to Utah to enjoy the mountains with her spouse. But she couldn’t stay away from her research and mentoring for long. “I just can’t quit it,” Rosenberg says. “I realized I really did not want to stop.”

That attitude is emblematic of Rosenberg’s dedication to the field of cancer immunotherapy—using the human immune system to fight cancer. It also reflects her commitment to the next generation of researchers. Now, she has been recognized by the American Association of Immunologists (AAI) as a Distinguished Fellow, a very small, international group of scientists known for their deep and lasting contributions to immunology.

“This honor correctly recognizes Sue as a leader in the field of cancer immunotherapy and her early insight that the immune system could be made to target cancer cells more effectively,” says Philip Farabaugh, professor and chair of biological sciences. “It was exciting for me, over the last 20 years, to watch how her lab homed in on this target.”

Part of the reason for Rosenberg’s unabated enthusiasm is that “right now the whole cancer immunotherapy field is at such an exciting stage,” she says. Rosenberg started on this work in the 1970s, and at that time, “nobody thought that the immune system would have any efficacy against cancer.” But in just the last 10 years, a lot has changed. Major advances have led to immunotherapies being used successfully with real patients.

“My generation of researchers in cancer immunology really set the groundwork to enable the type of advances that we’re seeing now in the clinic,” Rosenberg says. “For the people who’ve been in this field a long time, it’s very rewarding.”

Suzanne Ostrand-Rosenberg (far right, back row) and her lab members in 2013. Lucas Horn, Ph.D. ’17, is third from left in the back row (bright blue shirt). Photo courtesy Suzanne Rosenberg.

Students at the center

Lucas Horn, Ph.D. ’17, biological sciences, was one of Rosenberg’s final UMBC graduates and is currently a postdoc at the National Cancer Institute. “The lab environment really was a synergistic blend of ideas from all the students and Sue,” he reflects. “The open flow of ideas was often crucial in solving complicated problems, but also helped the students to develop the confidence to suggest ideas and control the direction of their projects.”

Rosenberg equally valued all members of the lab. “I always felt like an important part of the team,” says Lydia Grmai ’11, M19, biochemistry and molecular biology, who participated in undergraduate research with Rosenberg. Rosenberg’s high expectations of her students “gave us the chance to rise to the occasion,” Grmai adds. “She taught me how to really take ownership of a research project, which was instrumental as I began to envision and plan my career as an independent scientist.”

Grmai gives her experience in Rosenberg’s lab, and especially the frequent opportunity to travel to conferences, credit for her rapid advancement through graduate school at the New York University School of Medicine and to her current role as a postdoc at Johns Hopkins University.

“Science communication and professional networking remain two of the most valuable skills in my research career,” Grmai says, “and getting to hone these skills as an undergrad accelerated my growth that much more once I got to grad school.”

Rosenberg is grateful for the UMBC environment that emphasizes both research and education. That’s why she made UMBC her home for her 41-year professorial career. Many immunology labs are located in medical schools, research institutes, or hospitals , outside of undergraduate academic settings, but Rosenberg knew that connecting with undergraduate students would be a significant part of her career.

“It was really a combination of the quality and enthusiasm of the students, and being in an environment where I could both be involved with student activities and do research,” she reflects. “The undergrads drive the intellectual atmosphere of the lab as much as the grads and the postdocs do. I’ve been incredibly fortunate to have had undergraduates in my lab who have just been dynamite people.”

Despite her long-term commitment to her field, and significant contributions to immunotherapy research, Rosenberg remains humble. “I was shocked by the company I’m keeping as a Distinguished Fellow,” she says. “I think UMBC is in very good company. It feels good to be right up there with some of the other major players.”

Rosenberg held the Robert and Jane Meyerhoff Chair for Biological Sciences at UMBC for many years, which provided significant financial support that allowed her to send students to conferences and otherwise enhance the lab’s impact. That experience, and the generally supportive environment at UMBC, are top of mind for Rosenberg. “I never would have gotten this award if it hadn’t been for UMBC,” she says. “That’s absolutely true—providing the resources, the support, the students…I’m very grateful to UMBC.”

Driven by her endless curiosity and inspired by her time at UMBC, Rosenberg is involved in research, writing grants, and graduate education at the University of Utah School of Medicine. With the next big breakthrough in cancer immunotherapy right around the corner, she says, “I just can’t bring myself to quit.”