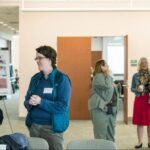 UMBC is one of six universities nationwide selected to host the “Engaging Scientists in the Science and Religion Dialogue” project, administered by the American Association for the Advancement of Science (AAAS). UMBC’s “Engaging Scientists” events will be held March 25 – 26, 2019, and will be open to the entire UMBC community.

The centerpiece will be a science engagement and communication workshop, run by staff of the AAAS Dialogue on Science, Ethics, and Religion (DoSER) program. The interactive, three-hour workshop will focus on how STEM graduate students, established scientists, and science educators can engage with diverse (and especially with religious) communities about science in both formal and informal settings.

“An individual’s cultural background and worldview (which, for most Americans, includes faith) informs their perceptions of the role of science in society, and their opinions about a range of science and technology issues,” says Robert O’Malley, project director at DoSER. The DoSER program “offers scientists, educators, and communicators a range of evidence-based strategies, toolkits, and resources for engagement” with people of diverse religious backgrounds, he explains.

Talking about faith and science is not always easy, nor does it come naturally to all scientists, even if they are people of faith themselves. “Some people see science and faith in harmony, but for others the two are discordant,” says Bill LaCourse, dean of the College of Natural and Mathematical Sciences, the program’s on-campus sponsor. He notes that this can set the stage for conflict, silence, and misunderstanding, which can only be resolved through dialogue.

To promote this dialogue, the organizers are developing a range of events for the UMBC community. On March 25, in addition to the workshop there will be a public panel featuring scientists and science communicators from a range of faith traditions, and an open-house style event where anyone can leave a written or video message recording their thoughts on the topic.

Partners from all three UMBC colleges are joining in the project. They will organize companion events for people to explore their thoughts on this topic more deeply within their on-campus communities.

A final component of the event is a Public Engagement Contest. Graduate students, postdocs, faculty, and staff who attend the workshop are eligible to enter the contest with a community partner outside of UMBC. DoSER will award $1,000 to up to four ongoing or proposed projects that demonstrate commitment to engaging with religious publics about science and technology. Entries are due April 15, giving participants time to be inspired by and reflect on the Engaging Scientists events. In addition to UMBC, other participating universities include Stanford University, Vanderbilt University, Texas State University, Indiana University, and Howard University.

More than one way to truth

Dean LaCourse and the UMBC co-organizers hope the March events will serve as a springboard to launch further discussion around science and faith and make the topic a more explicit part of UMBC’s mission to foster inclusive excellence.

Some scientists of faith may be reluctant to discuss their religious lives in an academic setting, LaCourse says. Yet some of the world’s greatest scientists have practiced some manner of religious faith without finding it in conflict with their work.

“20th century scholarship converged on the idea that no one approach to finding truth is sufficient or superior,” says Steve Freeland, director of UMBC’s Individualized Study Program and a Christian astrobiologist who has spoken internationally on the topic of science and faith.

“This gives all of us reasons for humility as we seek truth in our different ways,” Freeland says. “UMBC is blessed with such diversity in every imaginable dimension that it is an exciting place to experience a scholarly exploration of the interface between science and faith.”

That rich diversity creates many opportunities for UMBC community members to interact with people whose views differ from their own. “The path to acceptance of differing views starts with dialogue, which may be difficult without the proper words,” LaCourse says. “This program is a unique opportunity to help our campus begin the conversation.”

See more details about all UMBC Engaging Scientists events and register for the workshop and panel here.

Image: Faculty attending an interdisciplinary UMBC research forum on aging in May 2017. Photo by Marlayna Demond ’11 for UMBC.