After making NCAA history, graduating Retrievers celebrate the community that helped them get there 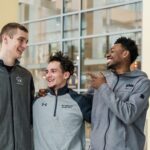 We say it every day in the huddle before practice: “together.” The chemistry and the friendships we have built helped us stay focused on our goals. I’m thankful for my teammates and coaching staff. Every single person on the team played a role to help us reach together and I’m proud to call them family.

K.J. Maura’s college journey took a few twists and turns, as he found his path from Puerto Rico to UMBC. Once he put on that Retriever jersey to play for the UMBC men’s basketball team, he immediately got to work making sure he would leave a lasting impact.

Maura consistently proved his dominance on the court. He was named the America East Conference Defensive Player of the Year in 2018, only the second Retriever to ever earn a major award in the conference. Shortly afterward, he skyrocketed to national recognition through UMBC’s historic run at March Madness. For the first time in NCAA men’s basketball history, a no. 16 seed toppled a no. 1 seed. Maura helped lead the charge, scoring double digits, instrumental in UMBC ultimately defeating University of Virginia, 74-54. After graduation, Maura will continue his basketball career overseas.

UMBC has introduced me to so many people who have helped set a path for me when my time here is done and with whom I will have lifetime bonds. It has also given me the two best moments of my life in winning the America East Championship and beating a one-seed in the NCAA Tournament.

Making the decision to travel from Wisconsin to Maryland to attend UMBC is one that changed Joe Sherburne’s life forever. Throughout his career at UMBC, Sherburne has skillfully balanced academics and athletics, excelling and setting records in both.

Sherburne was the first UMBC and first America East Conference men’s basketball player to ever be named to the Academic All-America Division I Basketball First Team. An exemplary leader, Sherburne served as a captain for the history-making 2017-2018 men’s basketball team and still maintained his place on the President’s List each semester. After graduating, Sherburne will remain at UMBC to pursue his master’s degree in data science and continue his basketball career with the Retrievers.

UMBC has prepared me in the way that the university has a standard in how you carry yourself and really embrace success.

Since coming to UMBC as a freshman, Jourdan Grant has truly put the time in to propel himself and the UMBC men’s basketball team toward greatness. He currently holds the record for playing the most men’s basketball games in UMBC history. He also became the first player in history to play 30 or more games within his first three seasons of competition.

Few will be surprised to hear that Grant’s most memorable UMBC moment was in the first round game of the 2018 NCAA men’s basketball tournament. Grant’s exuberance after dethroning no. one seed University of Virginia is showcased for posterity in the NCAA’s culminating “One Shining Moment” video of tournament highlights.

Jourdan Grant, right, pictured celebrating with K.J. Maura after beating University of Virginia in the first round of NCAA tournament play; photo by Ian Feldmann.

Portraits by Marlayna Demond ’11 for UMBC.