CADVC’s touring exhibits connect with audiences across the nation 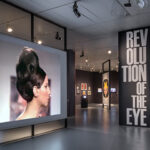 The Center for Art, Design and Visual Culture (CADVC) reaches audiences far beyond UMBC with dynamic touring exhibitions that explore the social and aesthetic issues of our times and inspire viewers to rethink how art institutions relate the public. The Center offers extensive educational outreach initiatives and publication programs, often in partnership with a leading educational and cultural institutions.

For All the World to See: Visual Culture and the Struggle for Civil Rights was organized by the CADVC in partnership with the Smithsonian National Museum of African American History and Culture. Through a host of media—including photographs, television and film, magazines, newspapers, posters, books, and pamphlets—the project explores the historic role of visual culture in shaping, influencing, and transforming the fight for racial equality and justice in the United States from the late-1940s to the mid-1970s. For All the World to See includes a traveling exhibition, website, online film festival, and richly illustrated companion book. The exhibition originated on the UMBC campus and since then toured extensively; prominent exhibition venues include the International Center for Photography, the National Civil Rights Museum, the National Museum of African American History and Culture, and the DuSable Museum of African American History.

In addition to the partnership with the Smithsonian, the extension of the exhibition through digital and printed efforts, and the initial exhibition tour, a subsequent tour in partnership with the National Endowment for the Humanities’ On the Road program has been traveling since 2012, reaching cities from Portland to San Antonio. The 20th installation of the exhibition through the NEH partnership will open in April at Kean University in Union, New Jersey and then continue to tour at least through the spring of 2017 with additional upcoming exhibitions in Connecticut, Illinois, Louisiana and Texas. The NEH is an integral partnership, supplying the resources and communications to reach diverse audiences and tailor the exhibition for a wide variety of venues.

Revolution of the Eye: Modern Art and the Birth of American Television, organized jointly by the CADVC and the Jewish Museum in New York, is the first exhibition to explore how avant-garde art influenced and shaped the look and content of network television in its formative years, from the late 1940s to the mid-1970s. During this period, the pioneers of American television—many of them young, Jewish, and aesthetically adventurous—had adopted modernism as a source of inspiration. Revolution of the Eye looks at how the dynamic new medium, in its risk-taking and aesthetic experimentation, paralleled and embraced cutting-edge art and design. The exhibition premiered at the Jewish Museum, and then travelled to the Fort Lauderdale Museum of Art where it was on view recently. The exhibition will open next at the Addison Gallery of American Art in Andover, Massachusetts next month before returning to UMBC in the CADVC gallery October 6, 2016 through January 7, 2017.

Visibility Machines: Harun Farocki and Trevor Paglen, which opened at UMBC in October 2013, explores the unique roles Harun Farocki and Trevor Paglen have played as meticulous observers of the global military industrial complex. Investigating forms of military surveillance, espionage, war-making, and weaponry, Farocki and Paglen each examine the deceptive and clandestine ways in which military projects have deeply transformed, and politicized, our relationship to images and the realities they seem to represent. The exhibition initiates critical questions about the crucial part images play in revealing essential but largely concealed information, and places the oeuvres of Harun Farocki and Trevor Paglen within the broader cultural and historical developments of the media they are creatively working with, namely photography, film, and new media. The exhibition marks the first time the work of these two internationally recognized artists has been shown together as well as significantly evaluated in respect to one another. After the exhibition premiered at UMBC an international tour included exhibitions at Die Akademie der Künst, in Berlin, Germany; Gallery 400 at the University of Illinois, Chicago; and the Gund Gallery, Kenyon College, in Gambier, Ohio.

The exhibition Where Do We Migrate To? features the work of nineteen internationally recognized artists and collectives, including Acconci Studio, Svetlana Boym, Blane De St. Croix, Lara Dhondt, Brendan Fernandes, Claire Fontaine, Nicole Franchy, Andrea Geyer, Isola and Norzi, Kimsooja, Pedro Lasch, Adrian Piper, Raqs Media Collective, Société Réaliste, Julika Rudelius, Xaviera Simmons, Fereshteh Toosi, Philippe Vandenberg, and Eric Van Hove. The exhibition explores contemporary issues of migration as well as experiences of displacement and exile. Situating the contemporary individual in a world of advanced globalization, the artworks address how a multiplicity of migratory encounters demand an increasingly complex understanding of the human condition. After its presentation at UMBC in 2011, the exhibition has toured both nationally and internationally, most recently exhibited at the Värmlands Museum in Karlstad, Sweden (view here). It will be on view at DePauw University’s Richard E. Peeler in the fall of 2016.

Symmes Gardner, executive director of the CADVC, says he is “very excited to be working on the Center’s next project on the near horizon, SEEING SCIENCE, a new initiative that engages a wide variety of research happening at UMBC.” The year-long campus-wide interdisciplinary project will bring together UMBC’s science, humanities, and art communities to explore the central and evolving role that photographic images play in defining, shaping, promoting, and furthering science. The project asks how photographic images made in and about the sciences impact public opinion, policy, science education, visual and popular culture, and trigger awareness of and discussion about pressing issues. Seeing Science was initiated by the Office of the Vice President of Research, in collaboration with the CADVC. More information regarding the web-based projects, exhibitions, film series and publications can be found on UMBC’s Arts & Culture calendar.

Image: Installation view of the exhibition Revolution of the Eye: Modern Art and the Birth of American Television. The Jewish Museum, NY. Photo by David Heald.