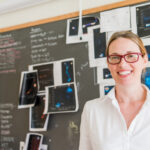 A new study has confirmed that a black hole eight billion light years away is zipping away from its galaxy’s center at 2,000 kilometers per second, or more than 4.5 million miles per hour. The result also provides, for the first time, very strong evidence that it is possible for two black holes to merge.

The galaxy where this is happening, named 3C 186, was first discovered in 2017. Initial observations suggested that 3C 186 was the result of two galaxies (and their respective black holes) merging. However, there were still other possible explanations for the physical distance detected between the galaxy’s center and the black hole. The new study, published in Astronomy and Astrophysics, strongly supports only one of the remaining scenarios: that two black holes merged and the resulting black hole is moving away from the galaxy’s center.

“This is probably the most clear-cut case” illustrating this phenomenon that scientists are aware of, says Eileen Meyer, associate professor of physics. She is co-lead of the new study with Gianluca Castignani at the University of Bologna. 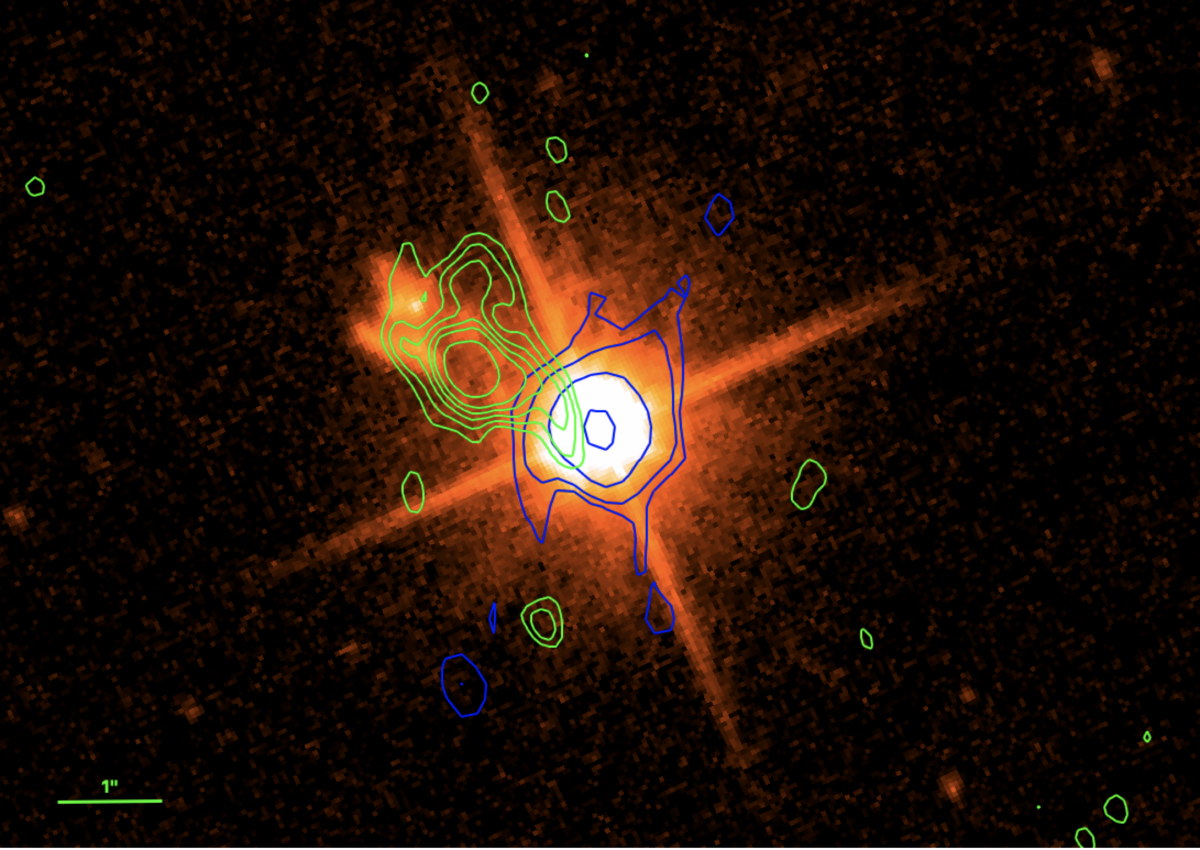 The two major findings—the black hole merger and its ouster from the galaxy’s center—are related. Theorists have predicted that if two black holes were to merge, they would release huge amounts of energy in the form of gravitational waves, Meyer explains.

Sometimes, “depending on how the black holes are spinning and their relative mass and how they’re oriented,” she says, that energy is not equally distributed in all directions. If there is “a lot of gravitational wave energy in one direction, there is consequently going to be literally kinetic energy given to the black hole in the other direction.” That means the black hole is going to move—in this case, very quickly.

“There were basically two pieces of evidence that made this story come together,” Meyer says. First, an earlier paper used high-resolution imaging from the Hubble Space Telescope to establish the physical offset between the black hole and the galaxy’s center. “That in itself might not have been weird,” Meyer says, because after two galaxies merge, “stuff is flying all over the place,” and it can take time for the black hole to settle in the center of the new, merged galaxy, she explains.

However, Castignani and Meyer’s new paper confirmed a critical second finding: the velocity of the black hole.

The imaging plus the velocity comes as close as you can in astronomy to proving the scenario that Meyer and her colleagues favor: a merged black hole has been kicked out from the center of its galaxy as a reaction to gravitational wave energy headed in the opposite direction. This is the first time both physical offset and velocity have come together so convincingly. 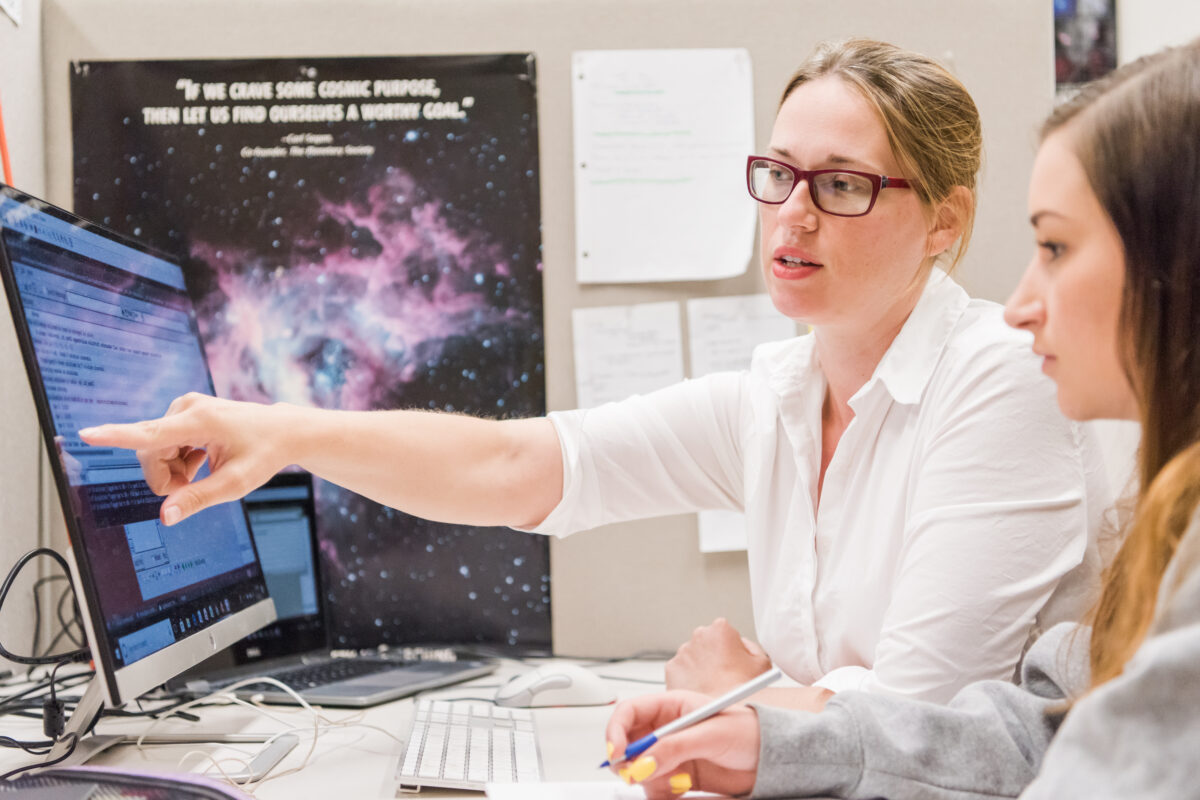 Eileen Meyer works with a student in her research space.

Meyer and colleagues figured out the velocity of the black hole by measuring the radiation emitted by carbon monoxide (CO) gas in the galaxy. They used a ground-based observatory called the Northern Extended Millimeter Array (NOEMA), located in the French alps, to collect the measurements.

The wavelength of the radiation emitted from CO gas increases as it travels across the universe from 3C 186 to NOEMA, a phenomenon referred to as red-shift. The farther away something is, the greater the red-shift will be. Galaxy 3C 186 is stable overall, so one would expect the radiation it emits to all have the same red-shift. However, NOEMA detected radiation with a smaller red-shift coming from the gas near the black hole. That indicates the black hole is moving quickly toward NOEMA relative to the center of 3C 186—in this case, at 2,000 km/s.

Detecting the velocity “was the thing that made us say, maybe this isn’t just some post-merger weirdness, but instead the black hole is offset because it has traveled out from what should have been the center of the galaxy,” Meyer says.

The research team wasn’t looking specifically for the galaxy 3C 186 when their study began. The initial observations came from what’s called a “snapshot proposal” with the Hubble Space Telescope.

Sometimes space-based observatories like Hubble make observations that require multiple orbits around Earth. But between these major observations, scientists can utilize smaller chunks of time for other studies that need only a quick “snapshot.” The data the researchers receive aren’t of the same quality as longer exposures, but they can be very useful.

In this snapshot study, the researchers received images of a couple dozen of their 100 or so preferred targets as Hubble traversed a partial orbit. “This black hole merger was observed by chance,” Meyer says. “There were odds against us.”

In astronomy, there can be pressure to choose a “safe” proposal, where researchers seek new data on a particular space object that’s already known to be interesting. In snapshot proposals, you often don’t know what you’re going to find, Meyer says, “but sometimes you need to take a chance on the unknown to make new discoveries.’”

As it turns out, this time they made a major discovery, adding to the story of how black holes merge. “When you build a story out of the evidence, it’s a bit like detective work,” Meyer says.

For systems so far away, scientists often can’t directly image everything that’s happening. Instead, Meyer explains, they have to infer what’s going on from the light produced, and it can be hard to narrow down the possible scenarios for what’s actually happening. This new study takes a big step forward by translating theoretical predictions into actual observed phenomena at galaxy 3C 186.

The new finding confirming that two black holes merged, and that the resulting black hole is traveling away from the galaxy’s center, “is actually very important,” Meyer says. “People always want the evidence for the scientific story, and now we have that evidence.”

The results are also encouraging for a new major mission led by the European Space Agency. The Laser Interferometer Space Antenna (LISA) will observe gravitational waves from space and could help detect more instances of merged black holes at the centers of galaxies.

“If you find one, you know there’s got to be many more,” given the sheer number of galaxies out there, Meyer says. “The first one is definitely important.”