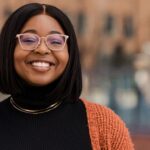 Haleemat Adekoya ‘23, political science, received a surprise phone call last Tuesday morning. On the line were both UMBC President Freeman Hrabowski and Valerie Sheares Ashby, who just one day earlier was announced as UMBC’s next president. They were calling together to share, with heartfelt congratulations, her selection as a 2022 Truman Scholar.

Adekoya has spent the last year preparing to apply for the renowned national scholarship focused on public service. After a series of rigorous interviews, the Harry S. Truman Scholarship Foundation announced Adekoya as one of just 58 students nationwide to receive the award. Adekoya is UMBC’s fifth Truman Scholar.

“I am incredibly proud of Haleemat. Her authenticity, sincerity and humility permeate everything she does,” says Carolyn Forestiere, professor of political science. “I feel very fortunate to have worked with this extraordinary young person as her professor at UMBC, and I know she will excel at whatever she decides to do with her future.”

The Foundation selected recipients from a pool of over 700 applicants who showed a strong record of public service and also submitted a policy proposal addressing a concerning issue in society. Scholars receive $30,000 to attend the graduate school of their choice, as well as access to public service programs, mentorship, and job opportunities within the federal government.

“It is an honor and a pleasure to know that I have been named a 2022 Truman Scholar. All I can say is Glory be to God and to my village, thank you forever,” says Adekoya. “I look forward to continuing to engage in my commitment to cultivate transformative learning spaces and elevating the voices of Black children and celebrating their brilliance.”

This year also marked the second time two UMBC students reached the final round of Truman Scholar selection. In addition to Adekoya, Rehman Liaqat ‘22, political science, was also chosen as a finalist. 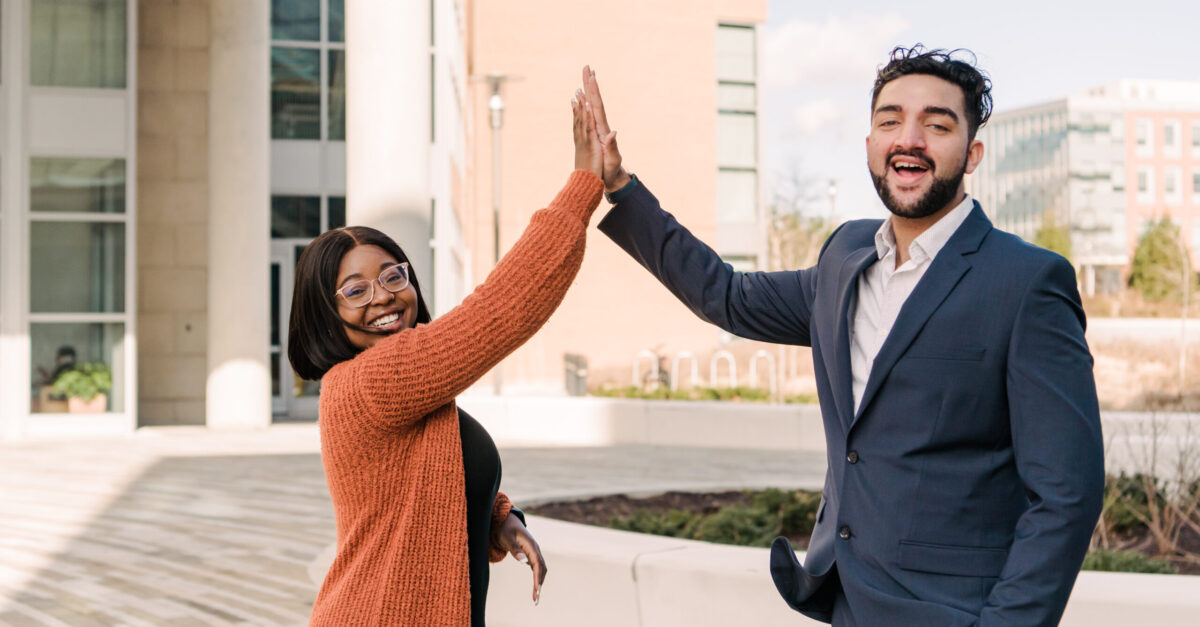 “Having two finalists is a huge honor for UMBC,” says April Householder, director of undergraduate research and prestigious scholarships. “With only 58 winners selected, that means that our students are highly competitive for this award.” Other institutions with multiple finalists include Duke, Harvard, MIT, and Stanford.

Liaqat and Adekoya are macro thinkers who have learned to both identify everyday problems at a local level and work towards systemic solutions. Liaqat has focused on legal advocacy while Adekoya’s interest is in education reform. Their steadfast commitment to personal growth in service of numerous communities made them strong candidates for the 2022 Truman Scholarship. 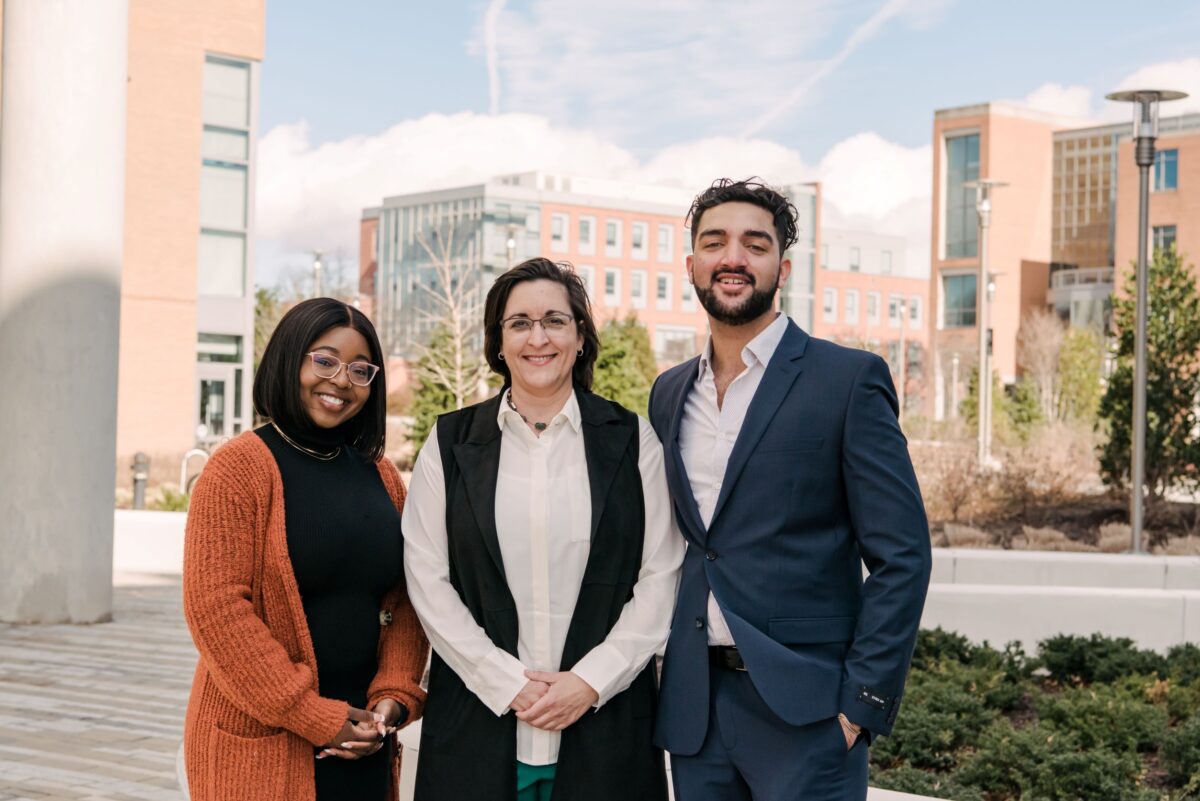 “Haleemat and I both began our journeys at UMBC serving with the Shriver Center, and now, we are both following a pathway towards lifelong public service,” says Liaqat. “This national recognition highlights the fact that UMBC is indeed a magical place that fosters community leaders and passionate public servants, such as Haleemat.”

“This journey has only solidified what UMBC is all about: a community of care and ‘true grit’ towards transformative excellence,” he reflects.

“To have been nominated as one of the two Truman Scholarship finalists is an experience that still has me on cloud nine. Words cannot describe how grateful I am to have been able to experience the scholarship process with someone as incredible as Rehman,” says Adekoya. “I am confident that the better world we reimagine is more than possible because of revolutionary, compassionate, and devoted dreamers like him.”

When Adekoya reflects on her path leading to the Truman Scholarship she sees the combined hard work of Baltimore City and County Public School teachers and students, her UMBC family, and the Sherman STEM Teacher Scholars Program. Their collective vision for sustainable and intentional full-service community schools propels her to think of education reform as an everyday practice.

“Education is said to be the most powerful tool one can use to change the world. However, our current education system excludes many Black students from experiencing such a transformative tool,” reflects Adekoya. “As an education advocate for Black students, I hope to one day develop multi-faceted strategies that address the flaws within our education system.”

With this goal in mind, Adekoya participated in the launch of UMBC’s Sherman STEM Teacher Scholars Program intensive virtual math incubator for 150 students at Lakeland Elementary/Middle School in Baltimore City during the first COVID summer. Concurrently, she served as an intern at the Maryland State Department of Education, with the Student, Family, and School Support Committee, in 2020 – 2021. The Maryland Higher Education Commission (MHEC) then chose Adekoya as student representative, serving on its Education Policy Committee and Outreach, Grants, and Financial Assistance Committee for 2021 – 2022. 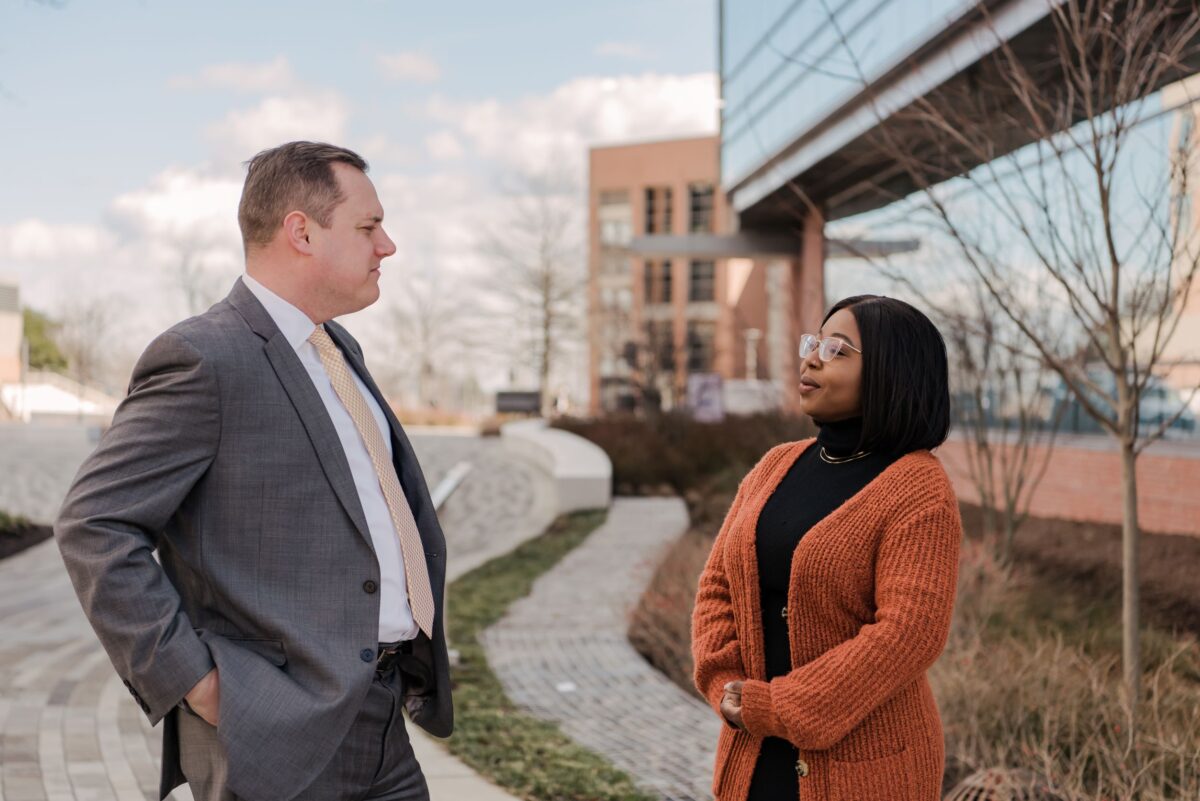 In 2019, prior to joining UMBC, Baltimore County Government awarded Adekoya with the “Young Woman of the Year” award for her community-engaged work as a member of the Superintendent’s Student Advisory Council; a mentor in a STEM program for girls; a local coordinator for the From Prison Cells to PhD program; and as founder of Dare2Bee, an empowerment organization for girls ages 9 – 18.

“Haleemat is such a strong and compassionate leader. One of the things that inspires me most about her is her commitment to others,” says her mentor Jasmine Lee, director of inclusive excellence in UMBC’s Division of Student Affairs. 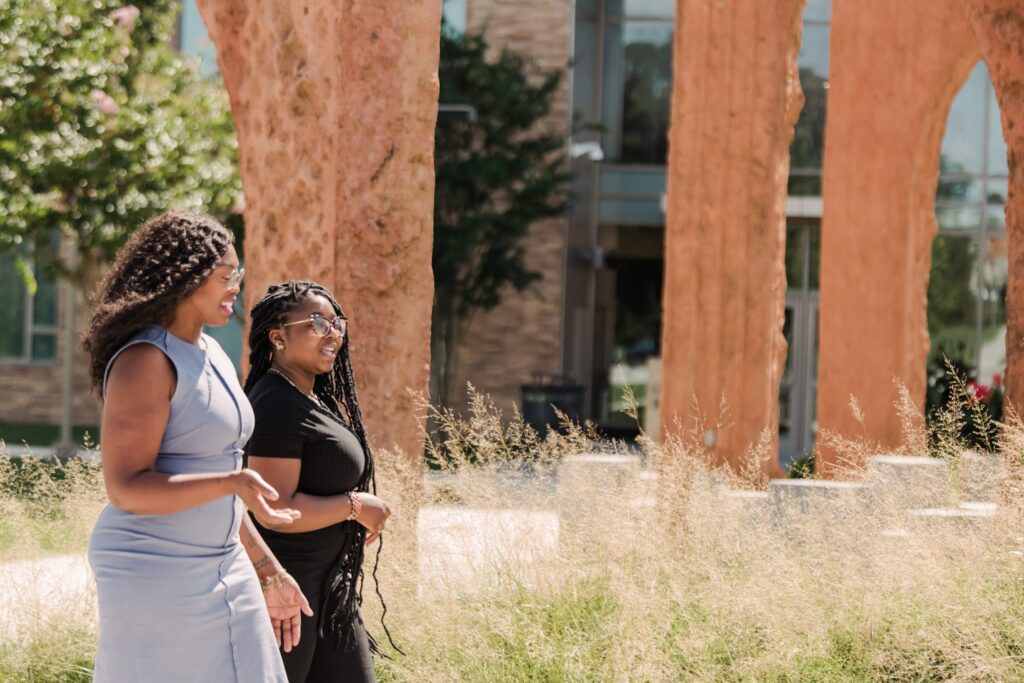 “She’s not a leader because she’s ‘ahead of the pack’…but instead because she is concerned about everyone making it,” Lee shared when Adekoya was named MHEC student commissioner. “She seems to move from the front to the back, and throughout the middle, empowering everyone to move at their own pace.”

Liaqat, a political science major, came to the United States from Pakistan when he was eleven. He spent his teen years in Salisbury, on Maryland’s eastern shore. His time was split between school and working at OC Quickstop, one of three family-owned gas stations.

He earned recognition for supporting his local community and came to UMBC ready to build connections and his leadership skills. He soon also discovered a love of constitutional law, and a commitment to promoting human rights internationally.

In addition to being named a Truman Scholar finalist, he has also earned the inaugural Campus Compact Mid-Atlantic Civic Fellow award. He is completing his master’s in public policy through an accelerated program at UMBC, at the same time as his undergraduate degree. Next, he will next enter a four-year joint degree program (MPP/JD) at the McCourt School of Public Policy and the Georgetown University Law Center. 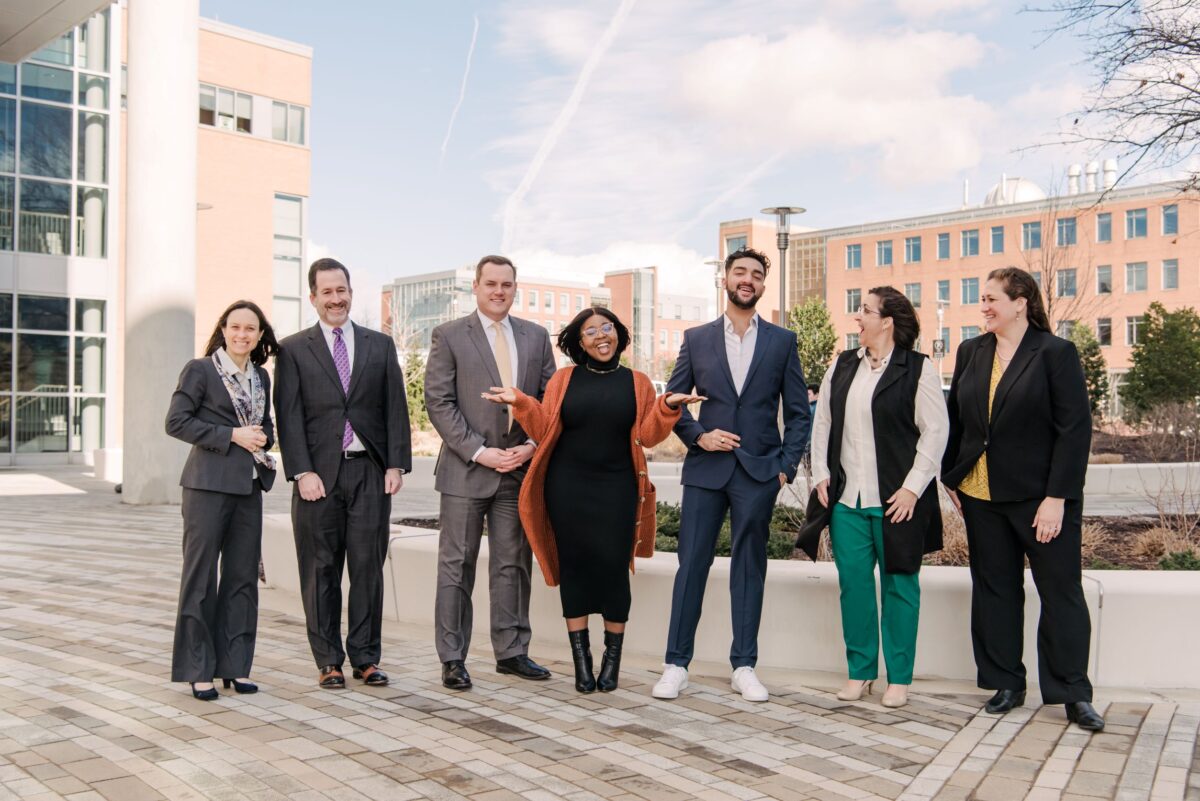 Adekoya and Liqat (center) with their mentors: (l-r) Laura Antkowiak, associate professor of political science and director of the Sondheim Scholars Program; David Hoffman, Ph.D. ’13, language, literacy, and culture, director of the Center for Democracy and Civic Life; Michael; Householder; and Lori Hardesty, associate director of applied learning and engagement at the Shriver Center.

Householder says Adekoya’s win and Liaqat’s recognition as a finalist are “a testament to the hard work of these students” and the support they receive from programs like the Sondheim Public Affairs Scholars and Sherman STEM Teacher Scholars, as well as the Honors College, Undergraduate Research and Prestigious Scholarships, and the Shriver Center.

“This is a community that provides rich experiences for our students,” says Householder. “Those experiences spark their passions for becoming public servants and using their well-honed talents to help others.”